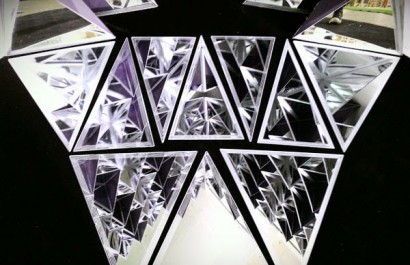 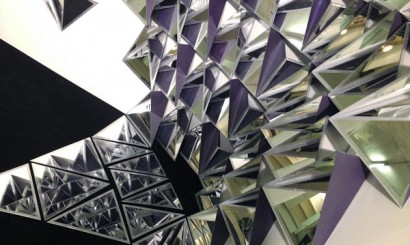 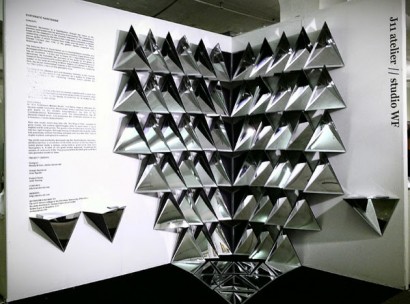 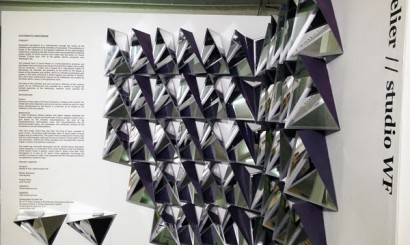 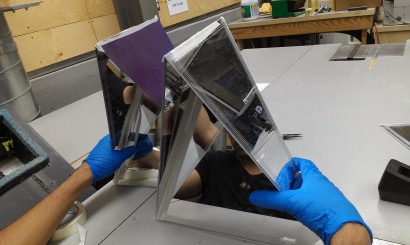 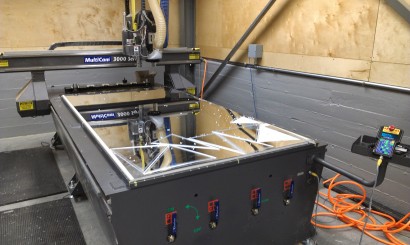 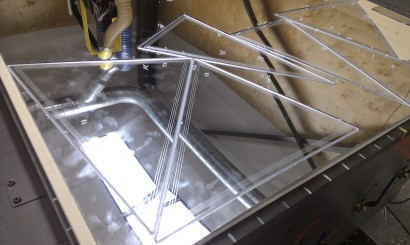 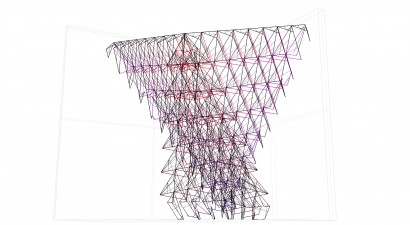 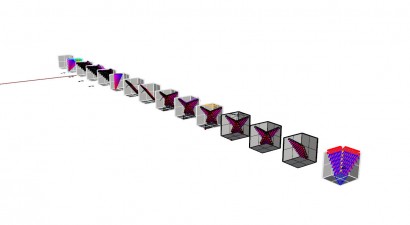 Systematic Narcissism was a finalist in the A+ Architizer Awards 2013 for the Architecture+Fabrication category. The project is a hybridization through the notion of the planetary grid system and the symmetry of narcissism. The installation is based on the obsession of the physical reflection of the object/subject relationship, created by the idea of man-made versus planetary projected planes (grids) of which humans have made onto the earth. I.e.: Pierre Charles L’Enfant plan 1791 of the golden section projected onto Washington DC.The fostered form is found based on a triacontahedron primitive and developed within the family according to the primitive angles. Every angle has an increment of 0.25m and is based off a logic-based system of derivatives. As indicated, the geometry of the world (or the globe) is based off the planetary grid system, which is a hexakis icosahedron grid system of the earth according to Bethe Hagens and William S. Becker; thus, the formal mathematical aspects of the installation are created by the offset within a basis of that geometric form.The base of the planetary grid and narcissus reflection of the modular pieces act as intersections that operates as a system to shape the devised geometry of the interfacing modular, which upholds the installation.BACKGROUND:Poetics:Narcissus is the origin of the term narcissism, a fixation with oneself. The Greek myth which depicted a prince who sat by a reflective pond for days being self-absorbed by the beauty it contained, as he looked at the reflection of his own beauty.Mathematics:In 1978, Professors William Becker and Bethe Hagens extended the Russian model, inspired by Buckminster Fuller’s geodesic dome, into a grid based on the rhombic triacontahedron, the dual of the icosidodecaheron Archimedean solid. The triacontahedron has 30 diamond-shaped faces, and possesses the combined vertices of the icosahedron and the dodecahedron.Their new model, which they later title The Ring of Gaia, revealed 15 great circles, 120 scalene right-triangles (with no equal sides or equal angles) and 62 node-points. The great circles divided each rhombic face into four right-triangles. Although having no interest in Earth grids, Fuller had previously noticed that these triangles and recorded their internal angles in planar and spherical notations.The model was eventually developed into the Unified Vector Geometry (UVG) projection, a connection of all of the vertices of the five Platonic solids placed inside a sphere, using Fuller’s great circle sets from Synergetics II. A total of 121 great circles appeared, increasing the number of vertices to 4,862. They proposed that the UVG grid could be a new geometric model for Gaia.DESIGNER: Wendy W Fok | atelier//studio WF PROJECT TEAM: Jose Aguilar / Dillon Philips